This week was packed with major economic news, most notably US and European central bank meetings. While daily volatility was high, however, these influences were mostly offsetting, and mortgage rates ended the week a little lower.

Early in the pandemic, the Fed put in place extremely accommodative policy measures to help the economy recover. Now, with inflation running at the highest levels in decades, the Fed announced Wednesday that it will remove those measures more quickly than indicated at the last meeting in early November. First, it will double the pace at which it will taper (scale back) its bond purchases, meaning that the program will conclude around March or April. In addition, officials forecast that they will increase the federal funds rate three times by the end of the year and another three times in 2023.

By contrast, the European Central Bank (ECB) announced Thursday that it will tighten monetary policy more slowly than expected. The ECB, which implemented several different bond purchase programs last year, will allow some to end as originally scheduled early in 2022, but others will be extended at least through October.

Consumer spending accounts for over two-thirds of US economic activity. In October, retail sales jumped a massive 1.7% from September, which was far above the consensus forecast. However, sales rose just 0.3% in November, which was well below expectations. Many economists had predicted that due to shortages of a wide range of products this year, consumers would start doing their shopping earlier than usual, and they appear to have been correct. Looking at the two-month period as a whole, it has been a strong holiday season so far. 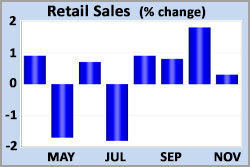 With the ongoing severe need for a larger inventory of homes for sale in many regions, the monthly report on housing starts has gained in importance, and the latest results were quite encouraging. In November, overall housing starts far exceeded expectations with an impressive 12% increase from October to the highest level since March. Strength was seen in both single-family and multi-family units. Building permits, a leading indicator, posted a solid gain of 4% from October. Rising prices and shortages for materials, land, and skilled labor continued to present challenges to builders.

Looking ahead, investors will closely follow news on the omicron variant and will look for additional guidance on the pace for tapering bond purchases and the timing for future rate hikes. Beyond that, Existing Home Sales will be released on December 22 and New Home Sales on December 23. The core PCE price index, the inflation indicator favored by the Fed, also will be released on December 23. Mortgage markets often are more volatile during the last two weeks of December due to reduced daily trading volume.