Concerned about higher inflation, investors began the year by pushing up bond yields. Wednesday’s more hawkish (in favor of tighter monetary policy) than expected Fed minutes then sparked another round of bond selling. As a result, mortgage rates ended the week at the highest levels since April of last year.

Early in the pandemic, the Fed initiated a new bond purchase program to help stimulate the economy. Given the progress of the recovery and the rise in inflation, the Fed is now in the process of winding down that program and is on track to conclude it around the end of March. With that in mind, investors have been looking for guidance on the timing for additional tightening measures including federal funds rate increases and a reduction in the massive portfolio of bonds accumulated on the Fed’s balance sheet during the purchase programs.

Based on the minutes from the December 15 Fed meeting released on Wednesday, investors moved forward their expectations for these other tightening measures. The first rate hike is now expected shortly after the bond purchase program ends, along with at least two more before the end of the year. In addition, all Fed officials expressed support for a reduction in the enormous balance sheet holdings of Treasuries and mortgage-backed securities (MBS) “at some point” after the first rate hike. This sooner than anticipated reduction in Fed demand for MBS caused mortgage rates to rise.

The closely watched Employment report released on Friday revealed mixed results. Against a consensus forecast of 420,000, the economy gained just 199,000 jobs in December. However, revisions added 141,000 jobs to the figures for prior months, offsetting most of the shortfall. The gains were broad-based across a wide range of industries, led by the leisure and hospitality sectors. The economy now has roughly 3 million fewer jobs than in February 2020 prior to the start of the pandemic.

The other major components of the report were stronger than expected. The unemployment rate, which is based on a survey of individuals, declined from 4.2% to 3.9%, below the consensus forecast of 4.1%, and the lowest level since February 2020. Average hourly earnings, an indicator of wage growth, exceeded expectations and were an impressive 4.7% higher than a year ago. 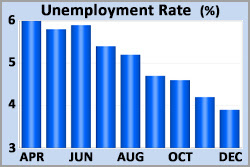 A couple of other significant economic indicators released this week from the Institute of Supply Management (ISM) remained at very high levels as expected. The national services sector index came in at 67.6 and the national manufacturing index at 58.7. Levels above just 50 indicate that the sectors are expanding, and readings above 60 are rare. Supply chain issues have had a greater impact on manufacturing companies that need materials to produce goods than on companies providing services such as computer programming or banking.

Looking ahead, investors will closely follow news on the omicron variant and will look for additional Fed guidance on the timing for future rate hikes and balance sheet reduction. Beyond that, the Consumer Price Index (CPI) will be released on Wednesday. CPI is a widely followed monthly inflation indicator that looks at the price changes for a broad range of goods and services. Retail Sales will come out on Friday. Since consumer spending accounts for over two-thirds of U.S. economic activity, the retail sales data is a key indicator of growth.