A wide range of major economic news caused an enormous amount of daily volatility this week. However, the various influences were roughly offsetting, and 2021 mortgage rates ended with little change.

Investors have been trying all week to evaluate how large an impact the spread of the new omicron Covid variant will have on global economic growth. Since slower growth reduces future inflationary pressures, news indicating a more severe outcome for the economy has been positive for mortgage rates, and vice versa this week. Similar reactions are likely to continue as new information about the omicron variant is obtained.

Fed Chair Powell surprised investors during his testimony to Congress on Tuesday with his change in tone about inflation. For months, officials have described current elevated levels of inflation as “transitory” due to short-term disruptions caused by the pandemic. Acknowledging that high inflation may remain for longer than anticipated, however, Powell said that it now may be time to stop using that term. As a result, he added, it may be appropriate to taper (scale back) the massive bond purchase program at a faster pace than announced at the last meeting. Since the added demand from the Fed for bonds has been positive for mortgage markets, these comments were negative for 2021 mortgage rates.

The closely watched Employment report released on Friday revealed mixed results for the labor market. Against a consensus forecast of 550,000, the economy added just 210,000 jobs in November, down from gains of over one million just a few months ago in July. Strength was seen in professional and business services, while the retail sector lost jobs. 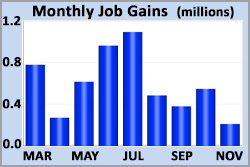 Despite the big miss in job gains, however, the unemployment rate declined from 4.6% to 4.2%, far below the consensus forecast of 4.5%, and to the lowest level since February 2020. These two components often paint a somewhat different picture because the figures for job gains are calculated from data reported by companies, while the unemployment rate is based on a separate survey of individuals. That said, the disparity was especially large this month.

Looking ahead, investors will closely follow news on the omicron variant and will look for additional guidance from Fed officials on the timing for future policy changes. Beyond that, the JOLTS report, which measures job openings and labor turnover rates, will come out on Wednesday. The Consumer Price Index (CPI) will be released on Friday. CPI is a widely followed monthly inflation indicator that looks at the price changes for a broad range of goods and services. The next Fed meeting will take place on December 15.